FOCUS on UNDER 30 ARTIST FORUM

March 20, 2021
Focus on Under 30 Artists forum.   Johnny Patramanis and Katerina Christou are both members of   the Greek team and have both been presented as Greece’s Under 30 Artists in Fabriano in Acquarello. This forum will focus on showcasing young artists in this category, selected from the Members of the International Watercolor Platform, in hope to give visibility to young talents in the beginning of their artistic path. “As young artists ourselves we understand the struggle of trying to surface in the art scene as well as to find our style and identity in watercolor. Through this opportunity that has been given to us we seek to help fellow artists get discovered. We will be sharing our personal opinions and point of view on artists we find inspiring in style and technique.” Johnny and Katerina
Post a Comment
Read more 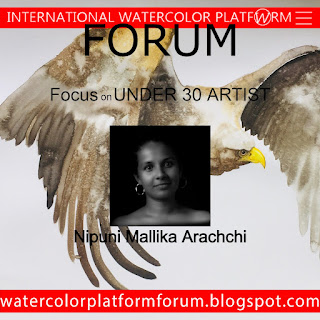 Focus on Nipuni Mallika Arachchi Johnny Patramanis Many young artists tend to overwork their paintings. This is not the case with Nipuni. Her work seems effortless, she likes to blend the colors on the wet paper (a technique that I use too) creating  mysterious and powerful effects, after that with a little splash of water she creates wonderful texture and you can see and feel the feathers of her eagles. They seem like a memory from a dream and that part is kind of true. She told us that she likes to paint from memory and only check a reference only if she has to.   Katerina Christou The first thought that comes to mind when observing Nipuni’s paintings is that they actually breathe, both as a medium and as a subject. By keeping her compositions simple, with little or no background, she manages to create space and atmosphere for her subjects. Also, by keeping a clear focal point on the eyes and the faces of the animals she chooses to paint she really manages to capture the impr
Post a Comment
Read more 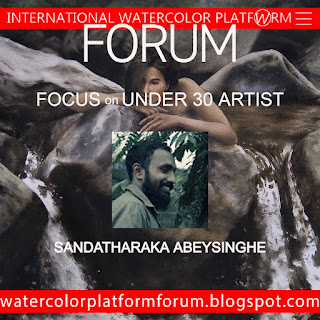 Focus on Sandatharaka Abeysinghe Johnny Patramanis Sandatharaka is a highly skilled artist, with a passion for classical – traditional painting. His beauty is based on a calm simplicity and serenity, the clarity and purity of the world of his dreams and the absence of any striking effect. He is a wonderful painter, he works with skill where his works really give us an idea of the greatness of nature in its most romantic form. Katerina Christou My first thought when I saw Sandaratharaka’s work was how beautifully his figures interact with the nature that surrounds them. His paintings give a sense of balance, a union between the often small scale human presence and the vast, atmospheric scenery around them. The people he paints don’t dominate the scene as one usually sees in figurative artworks, instead they seem to belong there, almost like an ethereal form of wildlife which the viewer can only catch a glimpse of from a distance.  We both think that Sandatharaka is a well established
Post a Comment
Read more 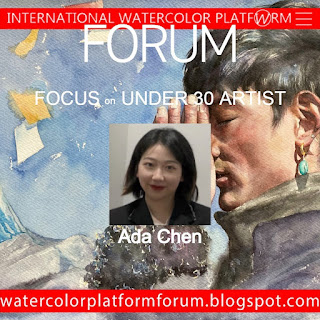 Focus on Ada Chen Johnny Patramanis Ada has this curiosity that you can find in a student as she likes to experiment through her subjects, painting children, adults and animals. She uses everyday sceneries as her main focus trying to capture the moment like a photographer would do, playing with the details that she wants us to see. She is a really well balanced artist with a drive for knowledge.   Katerina Christou The first thing I notice in Ada’s watercolours is that even though she is clearly a figurative artist she is not restricted to portraiture, her themes include everyday scenes, faces, animals. However, what is very noticeably a common feature among them is that in each painting she seems to focus her interest and give more detail to a specific part of her composition like the expression in the eyes or the positioning of the hands. I believe this is her way of showing to us what part of the scene she finds beautiful therefore giving the viewer a glimpse into her perspe
Post a Comment
Read more 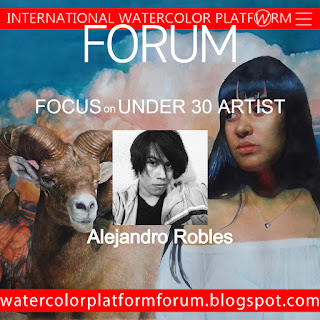 Focus on Alejandro Robles   Johnny Patramanis  Alejandro’s paintings are a feast for the eyes. He connect his female characters and animals using deep piercing gazes full of emotions. He treats his watercolors like oil paintings and through that he manages to create something rich and powerful. He reflects his character’s mood through the background using similar color choices. I like that throughout his work you can see the thoughts of his subject.   Katerina Christou The first thing one can easily observe in Alejandro’s work is that it’s highly symbolic. The main subject is the portrait but along with their physical appearance the viewer is presented with a glimpse inside their thoughts, dreams and psyche. The calm, dream – like landscapes and the symbolism of an animal companion helps the viewer gain a better understanding of what is inside the mind of the person that is portrayed. One thing for sure, Alejandro’s paintings call for the viewer to approach and observe cl
Post a Comment
Read more 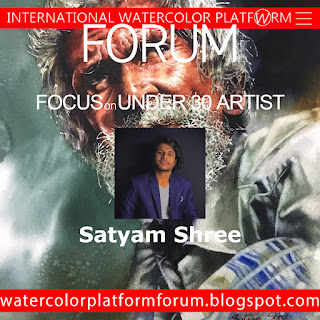 Focus on Satyam Shree   Johnny Patramanis: The first time I saw Satyam’s work was on his demonstration for the Fabriano in Acquarello 2020 online event at the Under 30 category. I was blown away by his talent, if we take into consideration that he is only 19 years old. His technique is impeccable and he has total control over watercolor, creating beautiful atmospheres around his subjects who seem to balance between light and dark. Katerina Christou: Satyam’s paintings are truly admirable both in technique and rendition, especially for such a young artist, his portraits emmit a great artistic maturity. The attention to detail on the facial features surrounded by a loose, almost abstract background work perfectly together to make his portraits come to life, allowing their gaze and their expressions to narrate their story. We both think that: Satyam is a very promising young artist who explores the potential of watercolor as a medium. Through his portraits he gives us a gr
Post a Comment
Read more